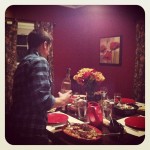 This weekend was the perfect mix of everything we love: Friends, kids, music, volunteering, exercise, fun errands, great food, Jesus and lots of restful down time.

{In fact, it was such a mix, I needed two posts to fit everything in AND make sense…welcome to “part one!”} 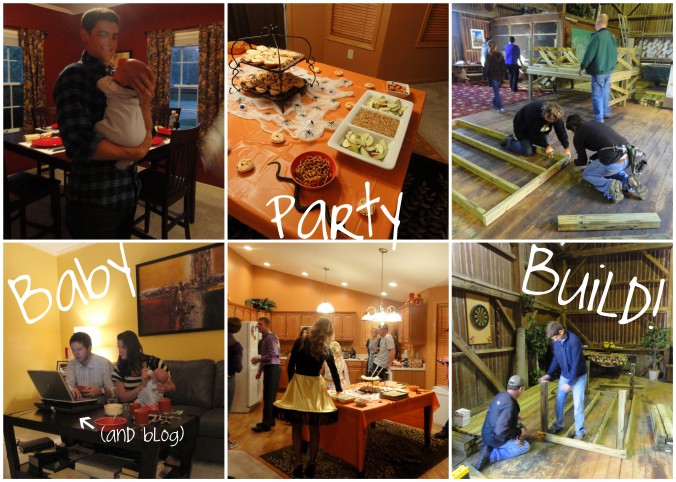 We got to see our good friends, Emily and Jeff, and their new baby (so, so cute!), went to a festive party with friends from work (with sweet costumes), built tables for a local educational greenhouse, AND even met someone famous… 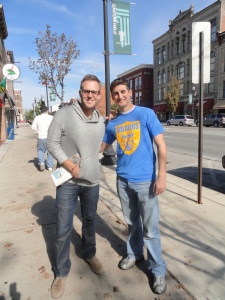 Here’s our fun story: A well-known Christian Musician, Matthew was in town for a concert on Saturday. We knew about it, and considered going, but hadn’t purchased tickets. After volunteering in the morning, we decided to head downtown to grab lunch at Scrambler Marie’s. We were chatting away over omelets, when I heard our waitress talking to the table behind a partition right next to us. She was saying, “No way!”

I turned around, and saw a two gentlemen with glasses as the table. It was Matthew and his father! He introduced himself to the waitress (She turned out to be a big fan of his!). We sat quietly and listened as they talked, and she snapped a photo, but knew that we wanted to say hello before we left. We were looking up his songs and bio on my phone, when we turned around and saw that they had slipped by us and walked out the door!

We rushed out (paid our bill first) said bye to the waitress, and walked briskly toward Matthew and his dad down Main Street. We caught up to them, and got to say hello! They both were super gracious, and his father took a photo of the three of us. We chatted for a few moments, and he offered us free tickets to the show that night – We were so. excited.

We spent the rest of the afternoon running errands, and then ate a yummy homemade pizza dinner with Valerie, Destrey, Carlie and Lydia. After brownies and ice cream (Ghirardelli are the best), we headed over to the venue.

The concert that night was amazing. I am the first to admit that I am often turned off by many Christian artists. I don’t want a cheap knock-off of a talented pop singer (“oh, here is the Christian version of backstreet boys…you’ll love ’em”…gag) but this was nothing like that.

Matthew’s songs were relevant and beautiful in their own right. I really love, “The Motions” and “My Own Little World.” One half of the concert was dedicated to a new project of his, “The Story of Your Life“, where he wrote songs based on some of the more than 10,000 stories he received about people’s struggles and triumphs, and God’s grace. The songs and lyrics met me right where I was…

It was powerful, and we were even able to catch up with the waitress, Kayla (who had also been given tickets to the show) and her boyfriend, Dustin. We chatted with them, and even ended up exchanging numbers so we could set up a coffee date sometime (you never know where you are going to meet new friends!). And, we got to get Matthew’s autograph and let him know how much he had blessed us. We felt {almost} famous!

It really was the perfect weekend, filled with encounters orchestrated by God, and a lot of fun.

Can’t get better than that….

Unless you toss in a little Justin Bieber.

Have you experienced any “Divine encounters” lately?

One thought on “{Almost} famous…”