I hope you all had a wonderful Christmas and are gearing up for a fun New Year! We’ve been in three states and will have slept in five houses by the time we head home this weekend…. but boy, I love it :)

Now, back to where I left off: My husband and I have a great relationship, and one of the keys of our happy marriage is that I do the cooking. I love it. He doesn’t. I like trying crazy things. He eats them without complaint (and maybe just one supplemental packet of fruit snacks later in the evening).

Well last year, our friends started getting on him about his lack of cooking prowess. He asserted that he could cook if he wanted, he just didn’t LOVE it.

They said he was full of it.

So, he set out to prove everyone wrong…. and made me one of the most delicious meals I’ve ever eaten (complete with handmade dark chocolate truffles and baked brie en croute.) Where did that come from?! He said it was his way of making up for lost time. And, his reason for making exactly one dinner per year for the foreseeable future. Quality, not quantity.

A year later, and with no dinners prepared in-between, he decided to make this a celebrated annual event. So, on to the computer, and off to the grocery store he went. (And yes, that means he has made dinner for us exactly twice since we were married June of 2009. No, not even mac n’ cheese). 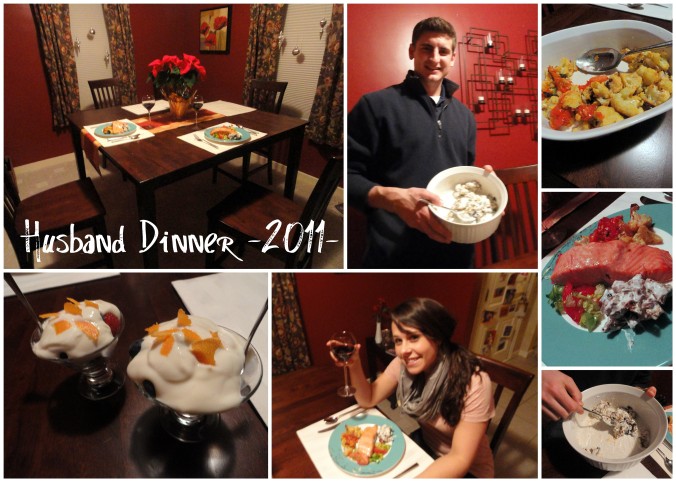 I Christmas shopped, and he cooked (and called when he needed to know why Kosher salt was different from other salt, where the dill was kept, and if you put meat between the halves of the broiler pan or on top of it). Though he has some cooking vocab to master, dinner was totally delightful. And, it included eggplant, Greek yogurt and cauliflower.

Try the recipes he used below (and maybe your man could even take a stab at it! At least once a year…).

You can find them all at FoodNetwork.com!

Encourage him to give it a try – You won’t be disappointed! Unless you have to clean up after him…

6 thoughts on “The Husband’s {Annual} Dinner”