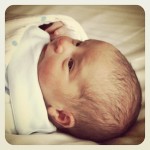 Because we are so very proud of him, we want to tell you about our boy:

Titus William is bright and happy and beautiful. He loves Curious George, Thomas the Tank Engine and mac n’ cheese. He enjoys the playground and the ocean and tickles from his Dad and swinging with his Mom and ice cream. Titus is also on the autism spectrum.

Some of you know, and some of you don’t, and with all of the adventures our family has been on lately, and in recognition of World Autism Awareness Day, we wanted to share a little about our story…

Diagnosed at age two, our sweet boy is strong and plucky and complicated. Our story isn’t unique, but it still took us by surprise… 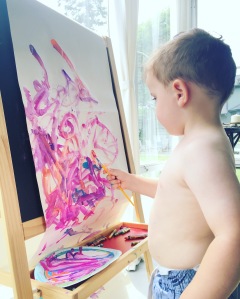 Once ahead of the developmental curve, we noticed around 20 months of age that Titus’s language development had stalled, repetitive behaviors started to appear, he seemed less social than normal, and a faraway look that was often in his eyes concerned us. After dismissal as simply being over-anxious, and then going with our guts and pursuing months of doctors visits – a couple of which said he was absolutely fine and there was nothing to be concerned about – we received his official diagnosis from the Yale Child Developmental Center in Connecticut, where we had moved barely a year before. Titus had ASD – autism spectrum disorder, with regression.

…for the last two years we’ve been working on this. We’ve grieved and rallied and wept on the floor and raged and rejoiced. We have laid our hearts open to the Father and put one foot in front of the other… 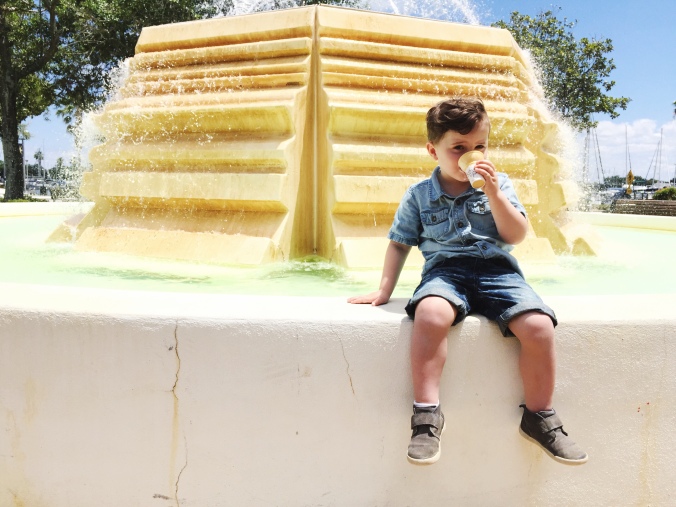 And, we’ve moved across the country, renovated two homes, appeared on a national TV show, flown on airplanes, ridden trains, gone to Disneyland and Disney World and Castine, ME and Palm Springs, CA, and NYC and visited the beach, played with new friends, floated in the pool, swung in the hammock, watched movies and snuggled. And struggled. 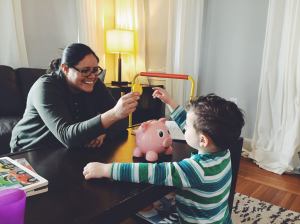 Nothing is the same, and everything is the same. Our Titus is still our Titus. But now, our days begin with a team of Behavioral, Occupational and Speech therapists each morning. And, puzzles and breakfast and sliding on slides. Our minds are occupied with vocabulary and behaviors and planning for an uncertain future. And, popsicles and date nights and buying new shorts because T is always growing.

We are the same and totally different than other parents. And the pain of that ebbs and flows. Looking at old pictures and watching old videos of “before” can be difficult. Because of his regression, Titus had skills at 18months that he is still working to re-master now. Imagining the future brings anxiety. But. Even in the stretching, the fear and the wondering, we have faith.

Titus knows his numbers 1-12, all of his colors, some of his letters and loves to match, sort, do flash-cards, play on his swing set, splash in the waves, and do puzzles galore! He asks us for everything he wants, and points out all of the red lights when we’re driving – he just uses single words instead of sentences. He snuggles and gives hugs and high-fives, and requests popsicles 10 times a day. He makes lots of silly noises – because they feel good to make – and it takes him a long time to fall asleep, and looks at his hands with his fingers spread wide, and gets excited about the wind moving the leaves in the trees. He’s tall for his age, and often gets asked if he’s five or older, even though he’s not quite four yet, which can be hard sometimes, because he can’t always act like a big kid. He loves to run and jump, and it can be hard to sit still sometimes, but he is laid back, an excellent traveler, and isn’t rough with people or things. Every day can bring something new – both good and tough – that we learn how to tackle together. He works harder than we can imagine, every single day, with people and tasks that stretch and strengthen him.

And, he’s challenging. And life doesn’t look like how we thought it would. But, it is still good. And, because we don’t get to see all of you all the time, we wanted to share our beautiful boy with you. And, we wanted to thank you for being kind. For understanding when we can’t gather the energy for another outing or activity, for being flexible, for not being hurt if our little guy doesn’t look at you when you say hello or try to play, and for just smiling when T’s antics are a bit different than other children his age. And, being such sweet friends. And for walking along side us in this journey.  We aren’t done. 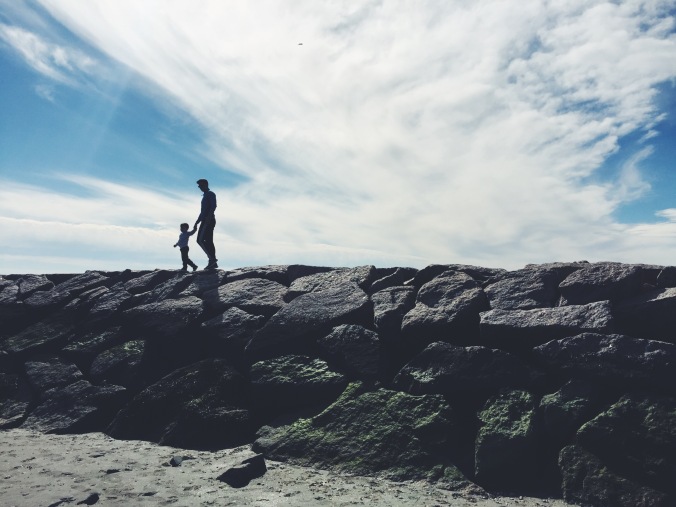 Our world is still big, and so are our dreams.

Titus’s name means, “Honorable Defender” and he had many amazing words of wisdom spoken over him when we dedicated him to the Lord as an infant. Even though our plans have had to change, we know that his purpose in the Kingdom remains intact and important. Our goal as his parents are to train and guide him to walk out that God-given purpose. Before he was born, we were given the picture of a rhino – a group of rhinos is called a “crash”. They can run at up to 30mph, but can only see 30 feet ahead. We don’t know what’s at 31 feet for Titus or our family, but we will run with faith to crash any obstacle.

We covet your prayers over Titus, and the promise that his life holds. We love him so very much, and know that there is so much light and joy ahead of us. We look forward to sharing more about our #lifeonthespectrum. Feel free to send us a note with questions or encouragement. One of the most meaningly phrases we’ve learned is, “If you’ve met one person with autism, you’ve met one person with autism.”  – Dr. Stephen Shore. Every single trait and ability – both positive and negative – is unique. Know what we are learning every day about ASD, and what works specifically for Titus and our family. We love you, and thank you.

6 thoughts on “Beautiful Boy | Our Titus”